On November 29th, 2017, in Hanoi, Ministry of Labour – Invalids and Social Affairs in collaboration with International Labour Organization (ILO) in Vietnam held the international conference on reforming social insurance policy – international experience and recommendation for Vietnam

According to Mr. Pham Truong Giang, Director General of the Department of Social Insurance (MOLISA), the situation of early retirement in the condition of aging population with life expectancy increasing will be the big difficulty for the Fund of Social insurance. The adjustment pension for the past years with unsuitable method led to the difference of pension of many subjects.

Currently, Vietnam has about 11.2 million social insurance beneficiaries. Foreseen, by 2030, 5.4 million people are expected to be paid from the fund and by 2050, there will be 10 million people. The current retirement age is 57 years old but the reality is 54 years old, while life expectancy is about 78 years old. Therefore, the duration of enjoyment is about 25 years, while the participation time is only about 28 years. 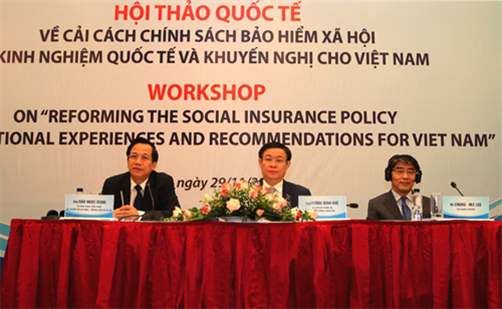 Addressing the conference, Deputy Prime Minister Vuong Dinh Hue asked functional agencies to overcome shortcomings, weakness and limitation, continue to promote social insurance policy reform as the important tool in order to contribute to effective implementation of the social security and sustainable development policy of the Party and the State. Social insurance is considered as one of the main pillars of the social security system, contributing an important part to implement the social progress and equality with the view that accessing to social insurance is a  social security right, associated with the goal of expanding the coverage of the entire population according to the appropriate roadmap. Vietnam was a country with a fast aging population and a large proportion of informal employment, the country would face to many challenges when building social insurance systems. Social insurance reform also should have a long vision of 20-30-40 years, because the policy latency is very long. However, it is required the quick action, the earlier conducting, the more space for reforming. In addition, there should be mechanisms, policies and administrative procedures to simplify the payment of social insurance, reduce the time to pay social insurance (currently 20 years) in order to attract participants.