On March 8, 2017, in Hanoi, the Ministry of Labour - Invalids and Social Affairs held a conference Improving the quality of dispatching Vietnamese labourers working abroad under contract 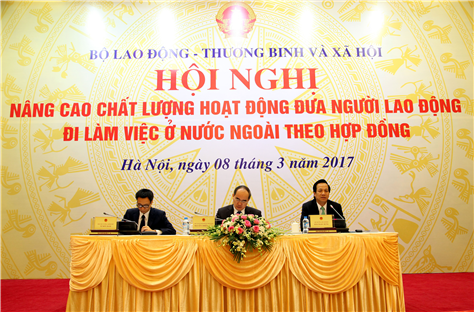 In the opening speech, Minister Dao Ngoc Dung stressed that the policy of the Party and the State was aimed at boosting labour export. these were not only considered as a method for solving employment, poverty reduction but also the strategy to promote decent work, thereby mobilizing resources for economic development. To improve the quality on the both quantity and quality of labourers going abroad to work, MOLISA will resolutely implementing the measures to reform the work of labour export. In which, the task focused on adjustment the labour export activities of enterprises; Maintaining, developing traditional markets, expanding new markets; Improving the quality of vocational training, foreign languages, and awareness for labourers at the pre-departure course; Expanding the scope of labourers with technical and professional qualifications to work abroad.

In order to improve the quality of activities of sending workers abroad, MOLISA will implement many synchronous solutions. Accordingly, the Ministry will develop more stringent regulations and conditions to ensure that only enterprises who really meet the requirements of the law can participate in the activities of dispatching labourers to work abroad

In the forthcoming time, the Ministry will severely punish the enterprises who violate regulations of law and inefficient enterprises.